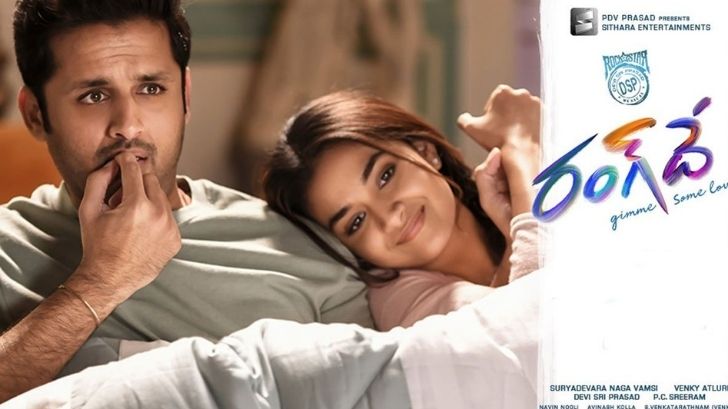 Rang De is a 2021 Indian Telugu-language romance film written and directed by Venky Atluri and produced by Suryadevara Naga Vamsi under the banner of Sithara Entertainments.

Rang De is a routine but entertaining film in which first half appeals to the youth audience, whereas second half appeals more to the family audience. Overall, with no heavy dose of sentiments, this predictable film goes easy on audience mind and is watchable. Unconvincing lead pair characterization fails to connect with the audience emotionally. With two hour six minute crisp run-time, ‘Rang De’ is a okay film to try.

On the whole, Devi Sri Prasad’s music, the lead pair’s face-off, and entertaining first half make this regular rom-com watchable. Despite its predictability, it ends as a decent movie.

Overall, Rang De offers nothing new concerning the story, but it is also engaging and enjoyable at the same time. The casting, visuals and writing do the trick. If you love the genre, it is an easy one-time watch.

On the whole, Rang De is a well made romantic drama that has its heart in the right place. Strong emotions, decent comedy and solid chemistry between the lead pair are basic assets for this film. Story wise, you get a dejavu feeling but the manner in which the narration is handled with proper drama and sentiment make this film click and ends as a good family watch this weekend. Go for it.

Rang De might see Venky Atluri find his comfort zone in the way his characters always seem to be on different wavelengths but manage to find their own mid-path by the end of it all. But it also sees him deliver a crisp film that keeps you entertained. If you’re a sucker for feel-good romances, this one’s for you.