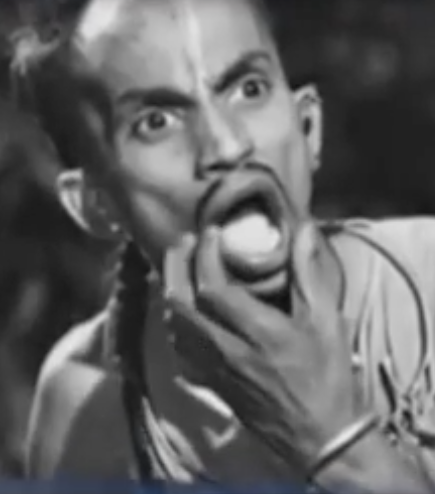 KASTURI SIVA RAO a first generation comedian of telugu talkie. He was an indian film actor,comedian,playback singer, producer and director known for his works in Telugu cinema. He was the first star comedian of Telugu Cinema. He was born on 6 March 1913, at Kakinada, E.G.Dist., Andhra pradesh, and died 24th February 1966 at Tenali.
He has become popular with Gunasundari katha 1949 movie. He was the first comedian who used to own a BUICK CAR which was one of the expensive cars of those days. He produced and directed a movie named Paramanandayya Sishyulu with Akkineni Nageswara Rao and introduced actress Girija as heroine. Unfortunately that movie didn’t do very well at box office which made him bankrupt, he even sold his favourite Buick Car to clear the debts. His decline started and his health also deteriorated. He returned to Stage acting but could not recover financially. Siva Rao subsequently remained as Stage Artist and one day while performing a skit in Tenali, he died on the stage. His body was transported by a stage friend through the trunk of a car to Chennai. Few of his close friends cremated him in Chennai.