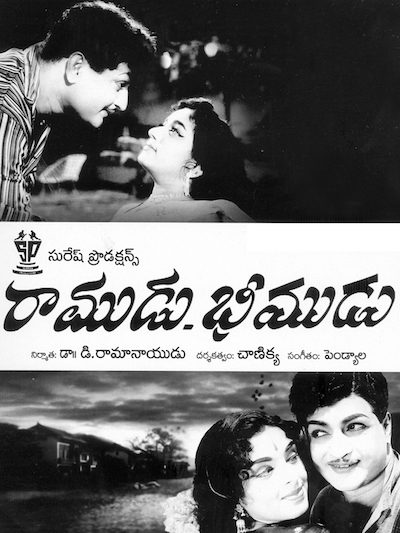 Suresh productions debut film in 1964, produced By D.Ramanaidu was RAMUDU BHEEMUDU which was written by D.V.Narasa Raju. Ramanaidu selected Tapi Chanakya as director who has given six flops. Rama Naidu approached N.T.Rama Rao for lead Dual role. Having good faith on writer D.V. Narasa Raju and also being interested to play dual role in his career he accepted the role and gave monthly five days dates for 9 months. Ramanaidu selected Jamuna for lead heroine role and also L.Vijayalakshmi.
They picturised one song” Desammu Marindoy “at Nagarjuna Sagar while it was under construction. Police expressed their inability to give security because they were busy with some other issue in same location. N.T.R. has taken an initiative and reached the spot, he requested the public to co-operate as there are no police to control the crowd. Impressed public co-operated without creating any chaos on sets and as a gratitude N.T.R. took photographs with them individually. Later the discipline and dedication of Ramanaidu impressed N.T.R to adjust his schedule in between and completed the movie in four months. Ramudu Bheemudu was a blockbuster hit of those days.